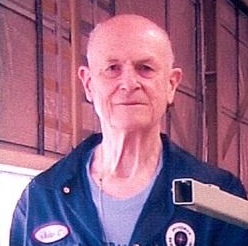 Passed away peacefully at Montfort Hospital on Thursday, November 14, 2019 at the age of 97 years. Robert John Corby, husband of the late Catherine Rae Barr. John was born and educated in England and emigrated to Canada in 1947. After a few months in Toronto he obtained a position with the National Research Council where he worked in several divisions for almost 20 years before becoming curator of industrial technology at the Canada Science and Technology Museum from which position he retired in 1987. In his retirement he spent several years “messing about in boats” before returning to the museum world as a volunteer at both the CSTM and the Aviation Museum. For his work in preserving and recording the Canadian industrial heritage, he was awarded the Queen’s Silver Jubilee in 1977 and on the occasion of the 40th anniversary of the CSTM was honoured by being named Curator Emeritus. Left to mourn are his daughter Vanessa Morris (late Dave) and his son Gavin (Vera), his grandchildren Dan (Kate) and James Morris as well as Colleen McAlpine (Jordan) and Christopher Corby (Melissa) and his great-grandchildren Jace, Sebastien, Evie and Evan. The family would like to recognize all the staff of the Montfort Hospital and the Promenade in Orleans for the wonderful care they provided.

At John’s request there will be no floral tributes or visitation, his ashes will be interred alongside those of his beloved Kay in the North Horton Cemetery near Renfrew.  In lieu of flowers, donations may be made in his memory to the Nature Conservancy of Canada, the Canadian Parks and Wilderness Society or the charity of your choice.