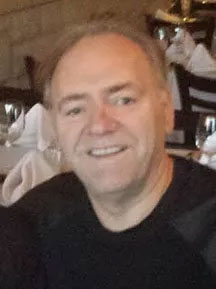 William Frederick (Bill) Turnbull, 60, of Ottawa, ON, passed away peacefully at the Ottawa General Hospital on 18 November 2015 following a challenging illness. A Celebration of his Life will be held on Monday, November 23 at 678 Richmond Rd, Ashton, ON at 1:00 pm…speeches, anecdotes and war stories are welcomed for anyone who wishes to say a few words.

Bill was born in Glace Bay, on Cape Breton Island, NS to William Turnbull Sr and Mary Hermack on August 29, 1955. Bill proudly served his country as a Teletype Operator from February 1973 until August 1981 when he was honorably discharged in order to follow his passion for Finance. He went on to earn a degree in Commerce from Carleton University. Bill worked for the Royal Bank, Bank of Montreal, Investors’ Group, and Regal Capital Planners before setting out on his own to become an independent consultant. He enjoyed playing baseball, basketball and loved being in the boxing ring.  Bill had an incredible sense of humour and was always smiling and laughing. He loved to play jokes and to tell jokes, often entertaining children and adults alike with his stories and magic tricks. He loved music and was self-taught on several instruments, including the guitar.  Bill is survived by his special friend, Mavis St. Germain, son Gary (Priscilla), ex-wife and close confidant, Joan Hamilton-Turnbull, his parents; Bill Sr and Mary Turnbull, siblings; Wendy (Rachelle, Ryan), Beverly (Mandy, Christopher), Valerie (Reeves Matheson), (Reeves, Andrew, Meaghan, Ian), Pamela (Elizabeth, Thomas, Alexander), Paul (Tammy).  He is preceded in death by his uncles Sonny and Stevie Hermack, Aunt Francie (Hermack) Gallant, his grandparents Alice and William Turnbull, and Fred and Mary Hermack.  In lieu of flowers, please consider making a donation in his memory to the Canadian Cancer Society (www.cancer.ca), the Parkinson Society Canada (www.parkinson.ca) or a charity of your choice.  The family wishes to extend their gratitude to the staff of the Ottawa Civic Hospital, Ottawa General Hospital, and Champlain Community Care (CCAC) for their assistance during this difficult time.  Interment of Bill’s ashes will be in his home town of Glace Bay, NS, at a date to be determined.  Pulvis et umbra sumus. (We are but dust and shadow.)