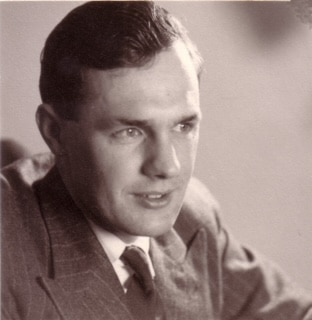 Henry Ralph Stratford was an engineer in every sense of the word. He designed aircraft, built a beloved home, and constructed elaborate family lawn games. He found joy in riddles, puzzles, and crosswords. His bright mind and resourceful nature can likely be attributed to his early days in England.

Ralph was born in Wigston Parva in Leicestershire, England on July 7th, 1923 to Albert Victor and Margaret Stratford, the second of their 13 children. He grew up in nearby Sharnford where he remembers seeing the huge R100 airships flying overhead when he was just six.

Three weeks after his 16th birthday, Ralph enlisted in the Royal Air Force on Aug. 29th, just 3 days before Germany invaded Poland. He was accepted into an engineering apprenticeship program at Loughborough College that normally would take 3 years, but because of the war, was accelerated into two. In 1943 he was commissioned as a Technical Adjunct and serviced military aircraft, fortunately without combat exposure throughout WWII.

His relationship with planes would continue for the rest of his life, as would his relationship with Pat, whom he met while serving in the RAF. At the time, Pat was contributing to the war effort as a Women’s Land Army girl. The two connected at a local dance while Teddy Bear’s Picnic played. They pooled their resources and married in January 1945, Pat wearing a dress made of parachute silk.

While the family lived in Cheltenham, England, Ralph worked as a civilian engineer at DeHavilland, where he specialized in aircraft landing gear. In 1951, Ralph immigrated to Ajax, Ontario and Pat and their two daughters, Susan and Sally, followed shortly thereafter. In his new role at Dowtys, Ralph designed the landing gear for the Avro Arrow. This historic piece of Canadian innovation would go on to be displayed in both the Canadian National Aviation Museum and the Royal Ontario Museum. During his career, he also designed landing gear for other aircraft including the Kaman Seasprite helicopter and the Dash 7 and Dash 8.

His commitment to good design was not limited to the skies. In 1960, Ralph designed and built a welcoming home in Whitby, Ontario. In 1962, their third daughter, Joy, was born. Over the years, 337 Fairview Drive would go on to be a treasured gathering place for grandchildren, great-grandchildren, friends, and some very good dogs – with vanilla ice cream for all.

Ralph was an active member in his community and demonstrated his commitment to civic engagement through his decade-long service with the local Kiwanis Club, lifeguarding neighbourhood friends at the pool, running for town council, and serving on the Whitby Library Board. After Ralph’s retirement, he and Pat travelled to many places with Haiti holding a special place in his heart.

In 2016, Ralph and Pat moved to Almonte, Ontario. Ralph remarked that the surrounding countryside reminded him of the landscape that had first welcomed him to Canada when they had settled in Ajax. Ralph demonstrated adaptability, generosity and gratitude that made a lasting impression on us all.

Ralph was independent-minded, and valued life-long learning. In his 97 years, he maintained an innovative mind and brilliant curiosity that kept his wit sharp and his heart open. He will be remembered for the strong principles of fairness and inclusion that he practiced every day.

If you wish to celebrate Ralph’s remarkable life, why not:

Fantastic site. A lot of helpful information here. I am sending it to some pals ans also sharing in delicious. And naturally, thank you to your sweat!

Ralph was also one of a few guiding lights at Thirty Club meeting monthly ( if memory serves,) in Toronto. There, we learned and practiced public speaking skills As well as learning rules of order for holding meetings..no, not Roberts', but Bourinots'. It was Ralph who walked over to 333 and invited me to join! Life well lived!

Ralph was also one of a few guiding lights at Thirty Club meeting monthly ( if memory serves, in Toronto. There, we learned and practiced public speaking skills As well as learning rules of order for holding meetings..no, not Roberts', but Bourinots'. It was Ralph who walked over to 333 and invited me to join!

A wonderful man who led a wonderful life. Keeping Hannah and her family in prayer during this difficult time. God bless.

The Stratford household was always a warm and welcoming home to visit when I was a child growing up on Fairview Drive. We would climb the willow tree (“First Up”), play with and be followed by faithful Missy and receive treats and goodies through the hutch between the kitchen and family room. Mr Stratford was always a respected figure but patient and kind with a dry sense of humour. (I’m sure Joy and I tested his patience on more than one occasion) I remember his almost daily summer bike rides past our house in his shorts and knee socks! When Mr Stratford ran for town council, as one of Joy’s chums, we helped make his election yard signs. Of course I worried that my signs were less than perfect, but to my great pleasure, Mr S assured me that this was not the case and that the signs that I made were ‘top quality’. It’s funny what we remember of certain people in our childhood. Regardless of who occupies 337 Fairview, it will always be referred to as The Stratfords’. Wishing all of the family and extended family hearts full of wonderful memories. Jacqueline Millar and the whole Millar family xo