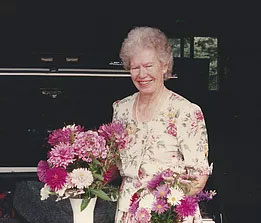 MOSS, Marjorie (neé Whillans) – November 14, 1923 – January 16, 2013, wartime stenographer, stay-at-home mother, superb cook, talented seamstress, hostess extraordinaire, party organizer, gifted gardener, long time member of the Anglican Church, passed away suddenly at Grace Manor in Ottawa in her 89th year.  Survived by her daughters Susan Margaret, Judith Ann (John Bishop) and Maureen Elizabeth (Bruce Stoskopf), granddaughters Karen and Andrea Stoskopf, her older sister Elinor and by Aunts Moira Moss of Toronto and Aunt Grace Whillans of Ottawa.  Predeceased by her husband Douglas Arthur Moss (d.2004) of Paris whom she married in 1946 after a wartime romance, father Alex Whillans (d.1957) of Ottawa and mother Isobel Murphy (d.1962) of Peterborough, older brother Dr. James Whillans (d.1999) and younger sister Lois (Peter) Newcombe (d. 2008) of Ottawa.  She will be sadly missed by many nieces and nephews.  Marjorie had a warm, generous, happy nature and she will be missed by all who knew her.  The family would like to thank the staff at Bridge St. Retirement Home in Belleville and of Grace Manor in Ottawa for their excellent care. We would also like to thank friends and relatives for their ongoing support.

Interment – Burial at Belleville Cemetery on Saturday, January 26th, 2013 at 10am.

Donations – Alzheimer’s Society or a charity of your choice