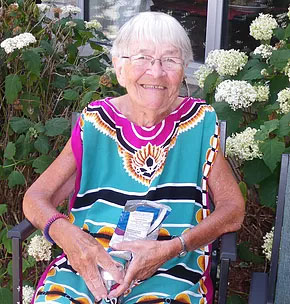 After a peaceful period of quietly winding down, Robin passed away at her home in Ottawa on Thursday, December 1.

Robin was an artist who lived most of her life in or near Windsor, ON.  She worked in a variety of media over the years, including sculpture, clay modelling, quilting and other forms of fibre art including creating detailed fabric miniatures. She studied at John Heron Art Institute in Indianapolis, where she won the Louise Vonnegut award for her outstanding work in sculpture.  She later attended Black Mountain College, where she studied under Josef Albers from the school of the Bauhaus.  She lived a vividly colourful life, full of travel and many other unique experiences such as being one of the first civilians – and a woman – to purchase a Harley Davidson motorcycle after WWII, which she named “Toujours Gai”.  As a quilter and fibre artist, she has been featured in various quilting books and magazines; and her works are on display in museums and public buildings, especially in the Windsor area.

Robin is survived by her sister Florence and four of her five children, Taylor (Donna), Dunstan (Patty), Drew (Margie) and Adrienne (Bill).  She was predeceased by her sister Evelyn; and by her son Scott (Claire) earlier this year.  Robin was Nana to Roxanne, Ryan, Chad, Christian, Aletha, Julian, Ariana, Shawn, and Francis; and great grandmother of Ashley, Kyle, Carson, Cara, Brianne, and most recently baby Sawyer, born on November 30th.  She will also be sadly missed by many other family members and friends.

Many thanks to the staff and personal support workers who attended to Robin over this past year at Rideau Place on the River.  They were all very caring and made her time there as comfortable as it was possible to be.

At Robin’s request, her remains have been cremated. There will be a Memorial gathering on Sunday, December 4th at Rideau Place (550 Wilbrod St.) at 2pm.  Next spring, there will be a party to celebrate her life in Windsor, ON.

Rideau Place on the River