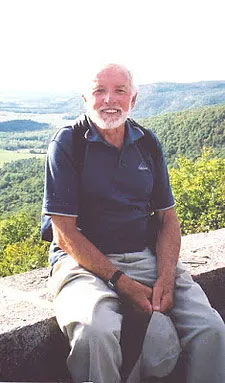 Franz John Marschall departed this life peacefully, with family by his side, at the Montfort Hospital in Ottawa, at the age of 89.

Franz’s parents were Therese Hechinger and Alexander Marschall. He grew up on a farm in Himberg, Lower Austria, and studied at a local agricultural school before coming to Canada in 1954. In the early years, he worked as a gardener in the Ottawa area. In 1974, he obtained a BA from Carleton University. Former students will remember him as a horticultural instructor at Algonquin College, Ottawa, and former clients for his landscaping business, Down to Earth. He enjoyed such outdoor activities as swimming, cycling, and skiing. Other favourite pastimes included good books, good conversation, scrabble, listening to music and CBC Radio, following his teams, the Senators and the Blue Jays. Franz maintained strong ties with his family and friends, and never forgot a birthday. We will all miss his ready wit and Austrian charm, and of course his goulash.

In 2014, Franz was predeceased by his ex-wife, Barbara Pitre Tanner, in Yarmouth, NS. He leaves behind a son Walter Krautsieder (Monika), of Gross-Enzersdorf, Austria; daughters Christine Mayer of Ottawa and Diane Ferrier of Picton; two grandchildren, four great grandchildren, and a nephew in Austria; another nephew in Australia. He was especially fond of his granddaughter in Ottawa, Erica Ashfield. Franz will live on in the heart of his “Sweetie,” Lynda Muir, and in the garden that he lovingly created for her.