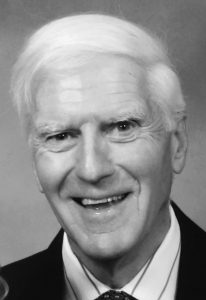 Born in Vancouver and educated at the University of British Columbia (B.A., LL.B.) and Harvard (LL.M.).  Served as a Flying Officer in RCAF Intelligence 1952-55. Called to the B.C. Bar in 1958 and appointed Queen’s Counsel in 1981.  Served for 39 years in the Canadian Diplomatic Service in Ottawa, Indonesia, United Kingdom, and as Canadian Ambassador to Israel, South Africa, Austria, and also to the United Nations in Vienna.  He served as the Canadian Governor to the International Atomic Energy Agency, as well as High Commissioner to Cyprus, Lesotho, Swaziland and Namibia. At External Affairs headquarters he served twice as Assistant Deputy Minister for Legal Affairs and at other times as ADM for U.S.A Affairs, Consular and Immigration, and Director of Personnel Operations.

Ted was an Honourary Life Member of the Canadian Council on International Law and was awarded the John Read Medal in 2008 in recognition of his outstanding contribution to the cause of international law and organization.  Upon his retirement in 1993, he taught international law at the University of Ottawa for several years, and was the author of numerous articles in Canadian law journals. He was a long time member of Rideau Park United Church, Ottawa.

Following his wishes, there will be a private cremation.

Ted was kind, accomplished and pleasant to be around. The world needs more like him. He'll be missed by the many friends he's made over the years, including those at Rideau Park. My condolences to his family.

I’m so sorry for your loss Nancy, may your memories bring you comfort. Condolences to you and your family.