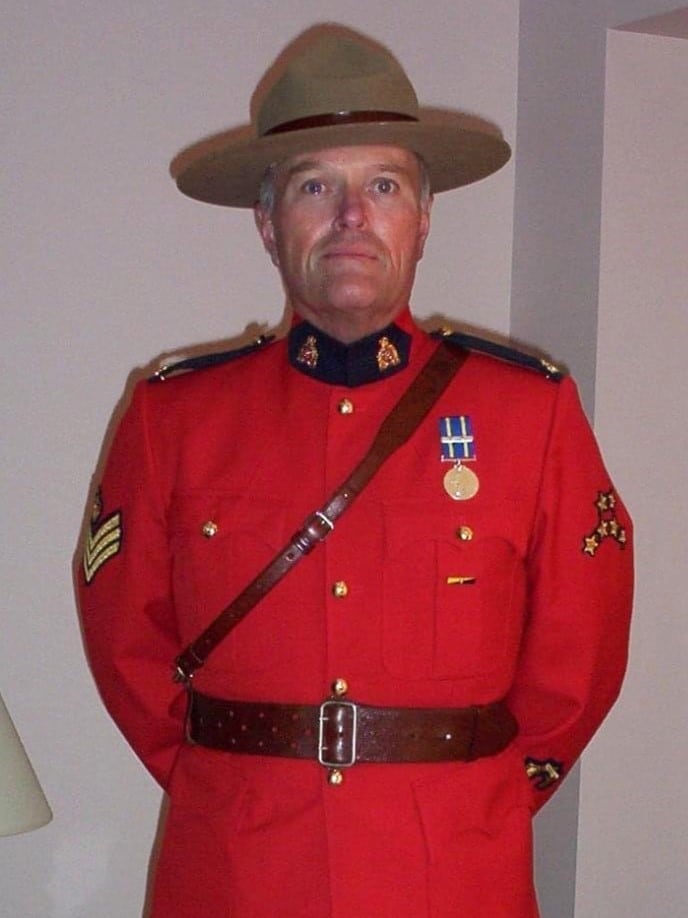 It is with deep sorrow that we mourn the passing of Ernest Gordon Reid, suddenly on January 5th, 2023, at the age of 75. Gordie, as he was affectionately known, was surrounded by his family and a great deal of love at the time of his passing.

He will be lovingly remembered by his wife of 51 years, Helene (nee Benoit), his children, Shelly and Mark (Cheryl), granddaughters Mackenzie and Taylor, his brothers, John and Ricky (Patti), his sisters-in-law, Lorraine and Charmaine (Nick) as well as many loving relatives and close friends. Gordie was predeceased by his younger sister, Virginia (Ginny).

Gordie was born June 26th,1947, son of Ernest and Alvina, in Ottawa. He was the oldest of 4 siblings who spent much of his time as a teenager playing hockey & football. Gordie continued playing & coaching sports throughout his life, most notably golf, which became a passion in his retirement years.

Gordie joined the RCMP in 1968 at the age of 21, starting his career with several postings in Cape Breton, Nova Scotia, where he would meet Helene and many of his lifelong friends. Postings for Gordie included Glace Bay, Arichat, Baddeck, Port Hawkesbury, followed by Halifax and then Ottawa, where the Reid family has resided since 1985. During his time in Ottawa, Gordie ascended to the rank of Sergeant & notably served on the RCMP Tactical squad for several years, where he received a commissioner’s commendation for rescuing an injured colleague on April 21, 2001 during the Summit of the Americas in Quebec City. Gordie retired from the RCMP in January 2004, completing over 35 years of distinguished service.

Gordie loved his job and lived a life of service, always putting the needs of others before his own. He had a joie de vivre and made the most of every moment and experience. Gordie shared a passion for being outdoors with Helene, sister in-law Charmaine, and brother in-law Nick, who would spend time together cross country skiing, kayaking, or walking along the Ottawa River. In recent years, he found joy in playing darts, poker, and bowling with his closest friends on the “Hillbillies” and the “River Rats”.

Spending as much time as he could at the Hylands Golf Course or golfing with his son, Mark, was the priority during golf season. Gordie loved being “Grampy” to his two beautiful granddaughters, Mackenzie and Taylor, who brought him so much happiness over the past 11 years. Spending time in the backyard listening to music with his daughter, Shelly, or having a glass of wine with his wife Helene, were some of his favorite pastimes. He was always smiling, laughing, and had a warmth that will be missed by all who knew him.

The Reid family wishes to send a special thank you to the staff at the Ottawa Heart Institute for their care and compassion.

A celebration of Gordie’s wonderful life will be held at a later date.

Helene, thinking of you and your family during this difficult time. Benny and Carole MacInnis Port Hawkesbury, NS

I am very sad to learn of Gords passing and offer sincere condolences to his entire family. Gord and I worked together for many years. in the Immigration and Passport program and he became a good friend and esteemed colleague. I know he will be missed by all who knew him, may he rest in peace.

My deepest Condolences too you Shelly as well as the entire Reid family! Please know that you are being thought of and my thoughts and prayers are with all his friends and family! May he rest in peace. Xoxo

Helene On behalf of Ina and myself may extend our deepest sympathy and condolences to you and your entire family.