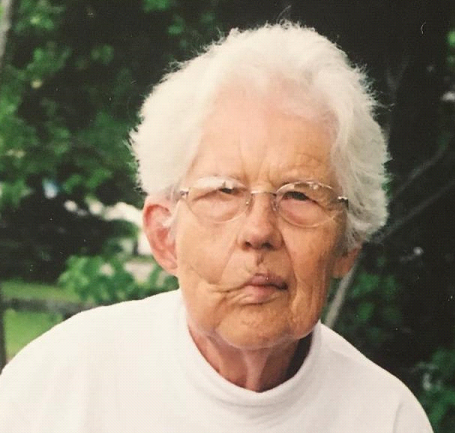 After completing high school at Camrose Lutheran College in Alberta, Beth joined the Canadian Women’s Army Corps. She served in Canada and Europe during WWII. She started university after the war, but married to have a family in 1948. We lived in Terrace Bay, Elliot Lake, Trenton, and finally in Kingston as she and Horace finished their education. When she graduated from UBC, she became a social worker with the Kingston Children’s Aid Society.

Beth was a member of St. Mark’s Anglican Church in Barriefield until she moved to Ottawa. She was always available to support and mentor those in need and was a volunteer with many organizations during her life. She had a variety of interests, including reading, politics, the environment, music (especially the opera), attending lectures and knitting. She travelled to many foreign countries after retiring, but her favourite destination was always the Arctic.

The family would like to express their gratitude to the staff and volunteers at the Perley. Their dedication, compassion and humour made the last few years of her life much richer. Beth herself appreciated her friends and neighbours for the companionship and help they provided as she aged. Cremation has taken place and, according to her wishes, a private celebration will be held. She will be truly missed. Funeral arrangements entrusted to First Memorial Funeral Services – Fairview Chapel, condolences may be left at : https://firstmemorialfairview.com/

Nope. I used your draft which was excellent and corrected a few details. Don't be modest.

This was written (mistakes and all) solely by Dianna Inkster.

Elizabeth (Beth) Kathryn or Catherine (nee Wagner) Goneau passed away on November 10, 2019 in her 95th year, at the Perley & Rideau Veteran's Health Centre in Ottawa where she had resided for the past 2 years after a fall. Beth was born in Spokane, Washington on December 15, 1923 to William (Bill) and Mamie Belvina(nee Bakken) Wagner. Horace Edward Goneau, of Bathurst NB, her husband of 41 years predeceased her, passing away in Kingston in 1990. She was predeceased as well, by her brother Gordon Edwin (Enid) Wagner of Grand Prairie Alta. & Whitehorse, the Yukon Territory. Surviving Beth are her children, Dianna (Brian) Inkster of Kingston, Bill (Janet) of Belleville, Mira Giovenazzo of Thornhill, and Wanda (Richard Moore) of Ottawa. She is remembered by her Grandchildren, Andy Inkster, Toronto, James Inkster (Kimberley Stoker), Saskatoon, Jayme Spinks, Lunenburg, Isabella Goneau, Belleville & Ottawa, Samantha (Brandon) Sheffield, Toronto, Dylan Giovenazzo, Barrie, Marie-Eve Therrien, Gatineau, Felix Moore, Gatineau and her Great Grandchildren, Elise Inkster and Francesco (Frankie) Sheffield. Beth has been cremated, and her ashes interred in a niche with Horace at the Cataraqui Cemetery in Kingston. At Beth’s request, a family dinner will be held at a later date. The family would like to thank the staff at the Duke of Devonshire Retirement Home who cared for Beth for 8 years until her tragic collapse and the Perley Staff on Ottawa 2 East, who provided care for her. Donations can be made in her memory to an organization of your choice. Growing up in the West during the Roaring Twenties and the Depression was her early life, and her experiences then had a tremendous impact on Beth's way of thinking.. She became a lifelong supporter of the CCF (later the NDP) and strongly supported their policies of Universal Health Care and Social and Job Security. An independent woman ahead of her time, she enlisted in the CWAC and served 2 years as a signals operator in Britain and Holland. Returning to Canada in 1946, she was discharged. Then, at a time when only male overseas soldiers were being given "veterans' preference" she reluctantly enrolled at the University of British Columbia, Vancouver with bare bones financial support from Veterans' Affairs. After 2 years at university and with 3rd year yet to finish, she married in 1948 and followed her husband, Horace to Terrace Bay, a paper mill town being carved out of the woods on the north shore of Lake Superior. Four children later, the family moved to Elliot Lake, a booming mining town, 100 miles west of Sudbury. When the mines began to close, the family moved again, and after a brief stop in Trenton the family settled in Kingston Ontario. Having completed 3 correspondence courses as soon as her children were in school full time and while working shifts full time in the Admissions Department in the local hospital in Elliot Lake at age 40 she returned to UBC, for the summer session in 1964 and completed her degree programme started years earlier. At the fall convocation, she was awarded in absentia her 3 years BA, a rare accomplishment for a poor woman of her generation. After working for a brief period in the library in the research lab in Kingston, she worked for many years as a caseworker for The Kingston Frontenac Children’s Aid Society. Her church, St Mark's Church of Barriefield was very important to her. After Horace and her mother, Mamie passed away, she became a regular volunteer at St Mary's of the Lake in Kingston as well. Beth supported many environmental causes, and loved her bird feeders and flower gardens on a lovely treed property a few minutes east of Kingston. She also believed strongly in public libraries and public edication and supported them often. She cooked and sewed with verve, but knitting was her passion. Another passion of hers was serious music. She especially loved the opera. She loved to travel with Horace in Canada and abroad. Widowed at age 66, Beth continued to travel extensively with friends and her grandchildren, mixing trips to China, Russia, the Panana Canal, the St Lawrence River, Norway the Caribbean and The British Isles in with several trips to Canada's North. Beth passed away as she had lived, quietly, without fuss, fittingly, just after breakfast on the eve of Remembrance Day supported in her final journey by the compassionate Perley & Rideau staff. (Text written by Mira Giovenazzo and revised and corrected by Dianna K. Goneau Inkster, her daughters)

Deepest sympathy to the Goneau family as you all say your goodbyes to a wonderful woman. I knew Mrs Goneau as your strong, kind, clever, witty and devoted mum and grandmother; and it was my great fortune to know her over the years and enjoy her friendship and goodwill. "Beth" was one of the finest women I have ever known.

I'd like to express my thanks to the staff at the Duke of Devonshire Retirement Home because my mother, Beth really enjoyed her time there and the kind attention the staff paid her. Her time at the Duke of Devonshire ended tragically, but you all did what you could for my mother prior to that. I'm also grateful for the help and the friendship of everybody at the Perley & Rideau Veterans' Health Centre and in Poplar Grove subdivision. Mommy wouldn't have had as happy a life as she did without all your help. We won't maintain and enhance our public health centre without public support. Mommy like a lot of her generation remembered what it was like before public healthcare. She believed in the social safety net and in the end, profited from it.

Dear Wanda, It is with great sadness that I send you, your siblings, and extended families this message of sincere condolences in the loss of a dear and precious Mother and friend to everyone. I personally enjoyed Beth for: her beautiful smile, the times I was able to wheel her to the dining room table, the time she gave me the permission to feed her when she was unable to do so. Thank you for this amazing experience of advocacy and allowing Bill and I to be part of your family. We watched the daily family dedication and attention to such a great Mother. I thank her for her dedication and service thus allowing us "Our Freedom" which should never be taken for granted. We still feel her presence at the Residence as we pass her Suite daily. We look for her at her scheduled eating table. We shall deeply miss the visits of Dianne and Brian with little "Momo". With all of their weekly visits, it is a remarkable sign of dedication and LOVE. You all are a "loving and caring family". May I leave these biblical passages to strengthen you at this time of grief: Psalm 121 and Psalm 23. Matthew 5: 4 reads: "Blessed are those who mourn, for they will be comforted." Blessings and Warmth Always, Margaret and Bill, Family Member and Resident