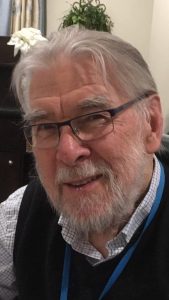 Peter was involved with life, politics and family. He strove to make a difference in our community and he did. We will always remember our friend Peter's bright smile which was contagious with anyone he came in contact with. Peter, you will be truly missed.

Peter is fondly remembered and missed by his loved ones and friends.

Cobbold Family: Our hearts go out to your family... I only met Peter a few times but really liked him. Good Bless, The Kuno Family

We remember Peter as the charming and energetic Chair of the Atheneum Society in North West Cove and the skillful coffee guy who transformed the regular cup of coffee into an elixir on Saturday mornings. He was an excellent host and very good company. He was gracious; a great salesman; We miss him personally, and as a member of the community. We were saddened by his struggles with his health in his last years. Rest in Peace, Peter.