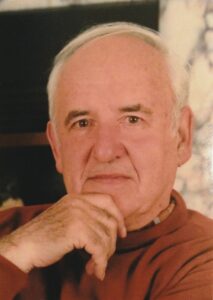 William (Bill) Palamar passed away at the Ottawa Civic Hospital, on Monday, June 4th, in his 92nd year. He leaves his wife of 66 years, Regina (Reg), daughter Cassandra (Peter Skirving), son William (Leslie Anne Palamar), and granddaughters Regina and Shelby Palamar. He was predeceased by his sister Nina.

Bill and Reg grew up in Toronto, where Bill practiced law for many years before relocating first to Whitby, then to Ottawa, so they could be closer to their beloved granddaughters.

He is remembered fondly by family and friends for being an engaging storyteller, for his quick wit, and for the broad range of topics on which he could offer information and opinion. One of his major interests was computing and he enjoyed participating in a local computer club, in all likelihood as one of their oldest members.

In later life he was a devoted caregiver to Reg and a daily visitor and her strong advocate at the nursing home where she resides in Ottawa.  Strongly independent, Bill remained engaged with the world around him even in illness, exchanging stories and joking with family and hospital staff, until his last few days.

He will be missed and not forgotten.

The family wishes to thank the doctors and medical staff at the Ottawa Hospital and Saint-Vincent Hospital for the care they provided.  A private memorial service will be held. In lieu of flowers, donations may be made to the Alzheimer Society Ontario.