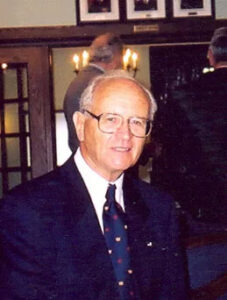 Died peacefully in his sleep on October 25th, 2016 at the Perley and Rideau Veterans’ Health Center after a full life.  He is survived by his wife, Hilda (Soulsby) Treherne, his daughter, Peggy (Treherne) Marce and son, Ian Treherne (Caroline Thibaudeau) and grandchildren Timothy & Nicholas (Marce) and Jason (Treherne) as well as many nieces and cousins.  Born February 1, 1923 in Ottawa, Carleton County (Ontario), Thomas Treherne was known to be a hardworking man who served in the Royal Canadian Navy (Canadian Armed Forces) from 1941 to 1945.  He was decorated with 1939-43 Star and Medal, Atlantic Star, Burma Star, Defence Medal and Canadian Volunteer Service. He served on many ships including the King George 5 Battleship and in peacetime with the aircraft carrier HMSC Bonaventure and HMSC St. Laurent destroyer.  He also worked proudly with the National Capital Commission and supported his son in his sports business (Sports 4) until his retirement.  The family will hold a private gathering at a future date. In lieu of flowers, the family invites you to donate to the Canadian Red Cross in testimony of your sympathy and your affection.  The family wishes to thank the dedicated staff at the Perley and Rideau Veterans’ Health Center who compassionately cared for him during his last months.