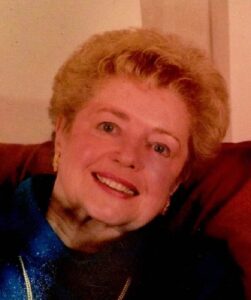 Regina (Reg) Palamar (Strash) passed away at the Garry J. Armstrong Nursing Home, Ottawa, on Friday, October 19th, in her 92nd year. She was predeceased  by her husband of 67 years, William (Bill) Palamar, who passed on June 4th. She leaves her daughter Cassandra (Peter Skirving), son William (Leslie Anne Palamar), and granddaughters Regina and Shelby Palamar. She was predeceased by her brother Walter (late Hannalore) Strash, and survived by her sisters Ida (late Albert Paffett) and Lillian (Jack MacDonald).

When she was a young child, Regina came from Lithuania with her parents,  Walter and Stella Strash (Strazevicius).  The eldest of four children, Regina grew up in Toronto, where she attended school, met her husband Bill, lived most of her married life, and raised their children. Later in life, Reg and Bill  moved to Whitby, and then to Ottawa so they could be closer to their  granddaughters.

Reg modelled and worked for a high-end women’s clothing store in her younger years. She expressed herself musically as a singer, performing in Lithuanian choirs and was active in the Lithuanian community.

Regina enjoyed the simple things in life – reading, listening to music, watching movies, and communing with nature. Being out of doors, picnicking, enjoying back yard family bbq’s, fall walks, and spotting the bright colour of a cardinal in winter all gave  her great joy. She was a community volunteer and committed recycler all her life. She was a talented knitter who loved making things for family members, especially her beloved granddaughters (who affectionately called her Butie).  Regina was also an accomplished baker, known especially for her rum-soaked fruitcakes, and her cheesecakes, always requested at family gatherings. The extended family meant everything to Regina and to her siblings, who talked almost daily and came together to celebrate birthdays, holidays and other occasions.

Regina’s unconditional love for family, her graciousness and warmth, and her gentle and giving nature were gifts that left a lasting mark on her family, and all who knew her. We are all deeply saddened by the knowledge that Mom  will no longer be in our lives. While her physical and mental capacities declined over the past few months, Regina’s gentle smile and the warmth in her eyes remained to the end.  We take great comfort in knowing that she is now in a better place.

Regina loved travelling, especially her trips to western Canada to visit her daughter and son-in-law. In keeping with Reg’s wishes, she will be cremated and her ashes scattered near Athabasca Falls, near Jasper, a place she particularly cherished.

The family wishes to thank the doctors and medical staff at the Garry J. Armstrong Nursing Home and Extendicare Starwood for the care they provided. A private memorial service will be held.  In lieu of flowers, donations may be made to the Alzheimer’s Society of Ontario.