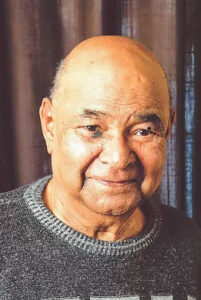 Pierre Cyrille Vencamah, 81, died Tuesday September 24, 2013 at his daughter’s home in Ottawa. He leaves 3 sisters, his 4 daughters, Sylvie and Sybille both pastor’s wives in Ottawa, Joyce and Doryse. Born and raised in the city of Curepipe in Mauritius, he has been a lifelong resident of Mauritius. For 38 years he has been in food and hotel business and the latest years was master-chef with the Mauritius Hotels Group. He had a passion for home maintenance and painting and would be working by himself on every part of his home and every spot of his property. He always wanted to stay all the time in Mauritius, but due to circumstances found himself travelling to Europe and North America. Though he did not speak any English, he was very often happy to be at the English-speaking Kanata Adventist Church where he was much loved by the members and where he was known as Papa to everyone. A memorial service will be held at the Ottawa-East Adventist Church on Sunday September 29 at 10:00 am.

Donations – Charity of your choice