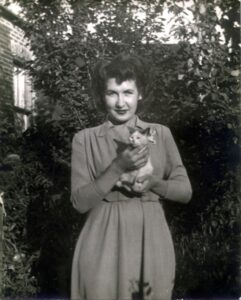 Nancy was predeceased by her husband, Mac, and is survived her two sons Neil and Duncan, their wives Eva and Catherine, granddaughters Alie and Jenn, niece Christina (husband Richard and daughter Lucy) and niece Pinky Isaacson.

She was a fiercely independent woman who considered every challenge an opportunity. She was a gifted artist and writer. Her letters are legendary.

As a young girl living in Point St Charles, she lost her mother at the age of 10 and was raised by her Scottish and Lithuanian families. Her father, John, later married Mary who became her mother and our grandmother.

During her days at Northern Electric during the war, she made many lifelong friends, including her best friend Thora Phaneuf, and the love of her life Mac, whom she eventually married.

When she moved to Ottawa in 2012 she was “adopted” by Neil and Eva’s friends and became part of a new, extended family.

She lived in her own apartment overlooking the Ottawa river until she was 96! She watched as her two beautiful granddaughters grew from babies to successful young women. Nancy was equally proud of her two sons, Duncan and Neil and their wives Catherine and Eva.

She will be deeply missed by her loved ones in Montreal, Ottawa, Almonte, Calgary and England.

A celebration of life will take place on Sunday, September 5th, at 1:00, at the Fairview Chapel. Donations to the Ottawa Humane Society would be greatly appreciated.