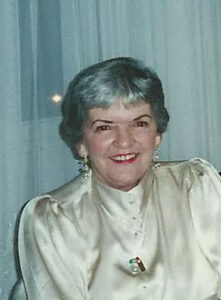 CALDERWOOD, Muriel – It is with great sadness that we announce the passing of Muriel Calderwood on March 5, 2013 in Ottawa at the age of 83. Beloved wife of the late Douglas Calderwood. She leaves behind her children Linda (late Joseph White), Nancy and John. Cherished grandmother of Michael (Tania Jacques), Laura and the late Steven. Great grandmother to Mia and Ruby. She leaves behind her loving sister Mildred. She will be sadly missed by many other family members. A Memorial Service will be held at Ressurection of Our Lord (1940 Saunderson Dr, Ottawa, ON) on Tuesday, March 12, 2013 at 10 am. A burial will be held at Montreal Memorial Park Cemetery at a later date. In memoriam, donations to a charity of your choice would be appreciated.

Funeral Service – Resurrection of Our Lord Church
on Tuesday, March 12th, 2013 at 10 am

Interment – Burial at a later date in Montreal, QC

Donations – To a Charity of your choice.