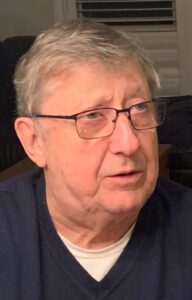 It is with great sadness, we announce the sudden death of Rejean (Ray) Raymond on March 12th. Ray lived a full life and had a distinguished career in the armed forces. Ray has left behind his loving daughter Tammy (Jonathan), grandson Matthew, brother Denis (Chantale), brothers-in-law Jay (Allison), Laurie (Brenda), Richard, and sisters, France (Royce), Micheline (Michel) and Diane (Eddy). Ray was predeceased by his ex-wife Shelley Raymond (nee Illingworth), brothers Yvon (Jeannette), Gerard and youngest sister Johanne (Stephan). Additionally, he will be missed by his ex-wife Elham Raymond (nee El-Hitti) and her children and grandchildren.

A funeral will be held on Saturday May 18th at 12 pm at the Catholic Church in Cap Santé, 30 PLACE DE L’ÉGLISE, CAP-SANTÉ, QUEBEC G0A 1L0. A small reception will be held in the hall next to the church immediately after the service.