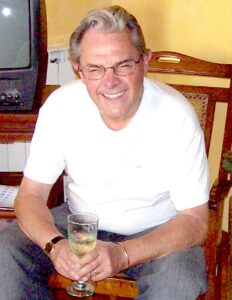 CABUCHE, John Leon of Ottawa, Ontario passed away peacefully on Monday, March 12th, 2018 at Elisabeth Bruyere Hospital at the age of 76. John will be forever and lovingly remembered by his wife and best friend of 38 years, Jane Louise Cabuche (nee Elliot); his two daughters, Michelle Simone Kovacs of Round Lake, IL, and Suzanne Nicole McClelland and husband Scott of London, ON; his sister Linda Hazel Pray and husband Michael of England and his brother Andre Cabuche of Kelowna, BC. John will be fondly remembered by his three grandchildren PFC William Joseph Yeo III, Alexandra Culley and Samuel McClelland; his niece Suzanne Chamberlain and nephew Richard Pray; uncle Clive Abbott-Stone; and cousins Christopher and Jamie Johnson and Peter Josling. John was born in Essex, England on November 28th, 1941 and is predeceased by his parents William and Molly Cabuche (nee Jackson). John emigrated to Canada in 1957 and originally settled in Ontario. He thrived for several decades in his career in the insurance industry and enjoyed many years of retirement prior to his passing. John is fondly remembered by for his love of life, appreciation of music, quick wit and infectious laugh. As per his wishes cremation has taken place and a private ceremony will take place at a later date. In Memory of John donations to the Canadian Cancer Society or to the Heart and Stroke foundation would be greatly appreciated.