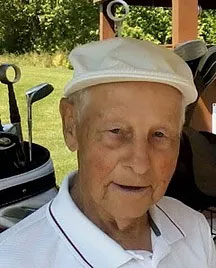 John Daniel Hutchinson died Friday March 28, 2014 at the Civic campus of the Ottawa Hospital, at the age of 90.

Born in Ottawa, August  13, 1923, into a large Irish-Scottish Catholic family, he was raised principally in Stratford, Ontario, graduating from the Stratford Collegiate followed by service during World War II in both the Canadian Army and the Royal Canadian Air Force, where John flew Mosquitoes in North Africa and was a competitive boxer for the Army and then for the RCAF.  John worked as a partner in the family business in Stratford, was active as a Captain in the Perth Regiment of Stratford and subsequently served as an officer in the Ontario Provincial Police and for many years in the tire industry working for Uniroyal and Dunlop tire companies and Thomas Built Bus Company residing over the years in Stratford, Oakville, Burlington, Grimsby, London and, ultimately, Ilderton and Ottawa. An avid golfer into his 90th year, John dazzled and partied on golf courses throughout Ontario and Florida for six decades.

The Hutchinson family would like to thank the staff of the Duke of Devonshire and Lord Lansdowne retirement residences in Ottawa for their care of John in his last few months. And a special thanks to two other families: that of Nicole Mutch, her husband Blake and daughter Madison for their special support of John, and his late brother Jim, in their final months. Thanks as well to the steady friendship and support of John’s long-time next-door neighbours, Rhea and Case Vanderloo.

Commemorative donations in John Hutchinson’s name can be made to:  the Building Restoration Fund of St. Joseph’s Church, 96 Huron St., Stratford ON, N5A 5S6