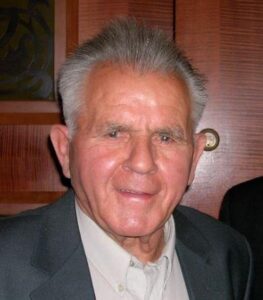 Franc Skupek, 84, Ottawa ON, passed away on Wednesday May 23, 2018, in the care of the Ottawa General Hospital.  Franc was born January 24, 1934 in Podnanos, Slovenia to Jozef and Emilija Skupek.  Leaving home at the young age of 14, he pursued his education in auto mechanics and completed his required military service.

At the age of 22, he attempted to leave the country with two friends.  Unfortunately, they were stopped at the border and returned to their families.  Franc was determined  and succeed on his second attempt by crossed the barb wired fences at Nova Gorica into Italy. From there he traveled to Paris France where he would live for 4 years.

June 1960 he arrived in Montreal Quebec, later moved to Toronto Ontario and finally settled in Ottawa on December 8th, 1960.

While attending evening English classes he met a little Spanish firecracker.  Courtship required him to entertain and travel with a VW Beetle full of Spanish women. On December 16, 1961 he married the love of his life, Nieves Diaz.

We will cherish all he has done, the love he gave and the lessons he taught. His sense of humour and laughter will be missed.   Dedek you will always be remembered and loved.