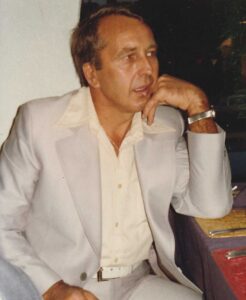 He was born in a different time and place where life was hard, simple, but needs were met. He left his boyhood behind in his early teens earning his way doing hard farm labour.

As with all young Danish men after World War II, he was obligated to do his turn in the army where he learned to shoot straight (he was so good a shot he was invited to take sniper training but politely declined), build bridges and defy authority.

Married with a baby girl on the way when he was 23, the decision to emigrate to Canada made as Denmark was still suffering in 1956 from the damage done in WWII, little housing, few jobs.

The next 40 some years saw the arrival of two more daughters, an assortment of jobs in the HVAC field, eventually retirement from Public Works as a ventilation specialist at 64. Life was good, house was bought and paid for in 14 years, usually travelling back home to Denmark every few years to visit and trips to Ohio to visit Sue, the youngest.

Somewhere in there a granddaughter was born and a grandson followed, they would be his only grandchildren but the light of his life.

Erik was an ordinary, plain man, not given to deep introspection but a hard worker, good provider, solid and dependable. He was not very demonstrative, accepting affection when given, but he loved his family.

It doesn’t feel real yet, he moved about the house like a ninja, even when doing the Tim Conway shuffle this last year, so it just feels like he’s here but typically quiet.

His absence has left a huge hole, but still resides in our hearts. Gone but never forgotten. Love you Erik.