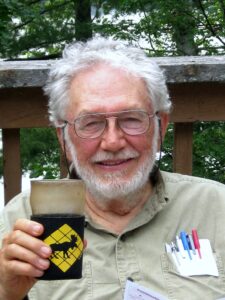 Dad died peacefully at his family home near Stittsville, Ontario, at age 90.  He was the son of Alan and Daphne Smith of Toronto.  Predeceased by his wife Lorraine (2007) and granddaughter  Gillian (2017) and his beloved canine companion, Goldie (2020), he is survived by his five children (Peter, Carol, Suzanne, Janet, Paul), and their families, including ten grandchildren as well as his younger sister (Ann Daw) and her family.

Dad had a lifelong relationship with nature and conservation.   In his youth he searched for owl nests, brought home baby raccoons, and lied about his age so he could join the Toronto Intermediate Naturalists with likeminded chums. His habit of keeping detailed notes and taking photographs began early, and he was never without his pen and notepad, binoculars or cameras through the years.

As a young man, Dad particularly enjoyed field work at the Algonquin Wildlife Research Station in Ontario (1948), working on Southampton Island in the Arctic,  and working as BC’s first Park Interpretation Specialist at E.C. Manning Park (1957).

Dad received numerous academic awards and scholarships through the years.  He completed three advanced degrees in Zoology at the University of Toronto, including his PhD in 1957. That Fall he joined the faculty of Carleton University in Ottawa where he was a beloved professor in the Biology department as well as the Curator of the Museum of Zoology until his retirement in 1995. His main area of expertise was small mammals.   Sabbatical trips to teach and conduct research included living and working in East Africa, Venezuela, Trinidad and Australia.

Through his life, Dad’s passion and action involved the natural world and preserving natural areas.  In 1962 he worked to save the Mer Bleue Wetland in Ottawa: almost 50 years later he was presented with a conservation award for this success.  More recently, land now known as the Smith Forest was gifted to the Haliburton Land Trust for future generations to enjoy.  He was a member of the Haliburton and Kawartha Field Naturalists clubs and supported numerous conservation causes. He worked on the Breeding Bird Atlas of Ontario and did field work into his 80’s on plant identification for an upcoming publication.  Dad loved nothing better than teaching others about nature, and he gave many talks to schools, scout groups and naturalist clubs, always with specimens and stories, and he led countless hikes and bird walks

Dad was kind, wise, funny, thoughtful, precise, and dedicated to the people and things he loved.  His legacy will live on in the lessons and teachings about nature he so freely shared with all lucky enough to have known him. In his final weeks, he was able to enjoy looking out at his bird feeders and forest property. He was taken to visit the beloved Haliburton cottage in his last months.  Dad kept up with his family by phone, and was engaged and telling stories to the end.

Donations in his memory can be made to the Haliburton Land Trust www.haliburtonlandtrust.ca (PO Box 1478 Haliburton, ON K0M 1S0), Nature Canada www.naturecanada.ca (Suite 300, 240 Bank Street, Ottawa, ON K2P 1X4) or Birds Canada www.birdscanada.org . Immediate cremation will be followed by a celebration of life in Haliburton at a later date.