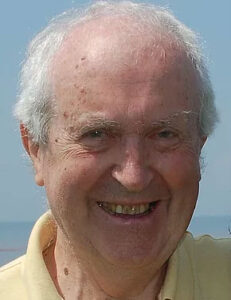 Desmond Hassell was born in Dublin, Ireland and emigrated to Canada in 1956. His career as a church organist and choir director began in Ireland when he was 16 and continued in Canada until he was 81. He was a high school music teacher in Perth, then in Ottawa at Glebe Collegiate and at Sir Robert Borden. Over the years he influenced hundreds of Ottawa musicians – choir members, students, and three generations of his own family. He will be remembered for his passion for music, his sense of humour, his boundless energy, his generosity, his devotion to fitness, his adventurous spirit, his mastery of the cryptic crossword, and his ability to incorporate anything into a teachable moment. He will be greatly missed by his wife Moira, his children Janet Kidd (Richard), Kevin (Helen), Ian (Pam) and Maeve Weddle (Greg); his grandchildren Rachel, Diarmid, Brett, Fiona, Morgan, Aidan, Tarryn, Graham, Eva, Luke and Gavin; and his great grandson Liam.