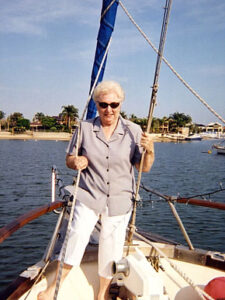 Anne Rose Bryon (Reid) – November 9, 1924 – September 7, 2016 – After a life lived fully and with gusto, Anne Bryon died peacefully at the Madonna Residence in Ottawa. She was the well-loved mother of Laura (Tony), Lisabeth (Michael), Norman (Alison) and Jay (Sue), and an incredible Nana to Rebecca, Stephanie, Jamie and Laurel. She was predeceased by her beloved husband Norman in 1970.

Anne was the youngest of 5 children; she is predeceased by her parents, Wilfred John and Ellen, as well as her siblings – Mary, Eileen, Kay, Jean, and Wilfred. Anne’s early childhood was spent in northern Alberta. She also had the good fortune to spend her youth in the beauty and nature of Vancouver – playing tennis, hiking in the mountains, playing goalie for her school field hockey team – she was athletic and unafraid. A staunch friend, she nurtured her ties to schoolmates from this era for well over 6 decades and easily forged new friendships. Becoming a navy wife in 1949, she led the usual nomadic existence residing in Washington, Halifax, Victoria and finally, Ottawa where her beloved husband, Norman, died all too early in 1970. Undaunted, Anne continued on as a single parent to Laura, Lisabeth, Norman, and Jay while working in Personnel at what was then called Revenue Canada Taxation; she was well-regarded for her common sense and ability to bring order to chaos. Retiring in 1989, she moved to Victoria – to be closer to family and to escape Ottawa winters. She continued to lead an active life, volunteering well into her late 80s, socialising, and travelling. She continued a family tradition of active involvement in politics. She took in strays of all types. Her cookie-baking sessions with her grandchildren were legendary.

In all things, Anne was fun, fearless, loyal, steadfast, and duty-bound. She died, as she lived, surrounded by love.A memorial service will be held at Trinity Church, 1230 Bank Street, at 1:30 on Wednesday, September 14, with a reception to follow at the church. In lieu of flowers, Anne asked that donations be made to the MS Society of Canada.