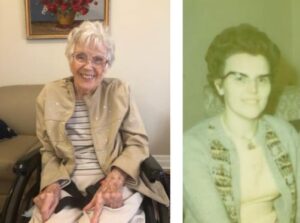 Clara was an exceptional artist with her knitting needles – the sweaters she made as gifts are still treasured by many friends and family. She also had a natural green thumb – her garden always produced a vast array colours, vegetables, and joy. The Adlakha home usually had the smell of baking –homemade bread fresh from the oven, or pies that didn’t last long. Clara dedicated her life to her family and friends, always thinking of others first. The friends she made lasted a lifetime, starting with those from England, from India to her homes in St. Catharines, Cape Breton and finally Ottawa. And she always surprised first time acquaintances with her sharp, dry wit that made you smile.

Her final days were comfortable due to the personal care provided by Alem and MC (thank you both for all you did for around the clock care), the staff at Windsor Park Manor, and the final gentle move by First Memorial.

Arrangements are under the care and direction of First Memorial Funeral Services – Fairview Chapel – Ottawa, ON. In lieu of flowers, it was Clara’s wish to those who remember her please consider contributing to their favourite charity instead. Due to pandemic restrictions, a small service for immediate family will be held at Windsor Park Manor on September 24th. Condolences may be left at firstmemorialfairview.com